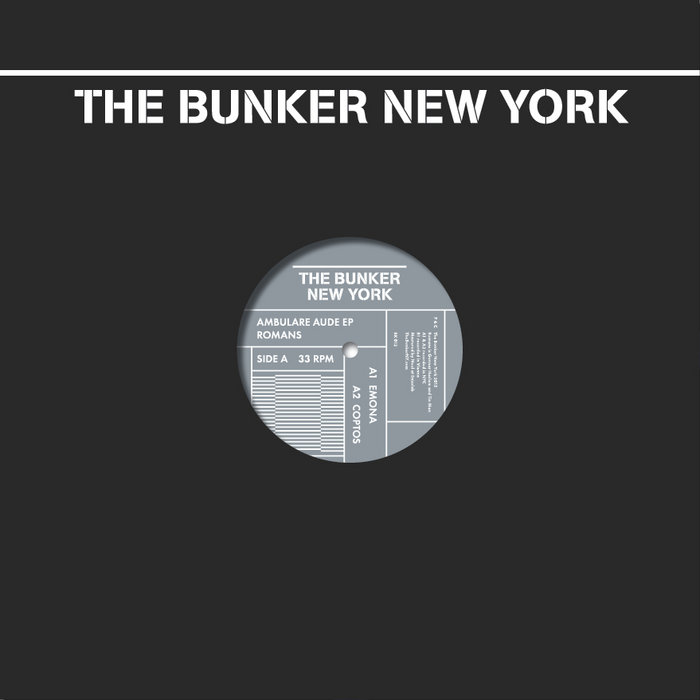 For more than a decade, The Bunker New York has been a nexus point for the transnational techno community. A chance meeting at The Bunker in 2011 brought together Gunnar Haslam and Johannes Auvinen (also known as Tin Man), who became fast friends and collaborators soon after, conceiving a joint project called Romans. The Bunker New York is proud to present Romans' Ambulare Aude, a collection of atmospheric acid techno tracks following the project's debut on Auvinen's own Global A in 2014.

"The Roman theme opens a world to explore beyond both of our past endeavours," says Auvinen, explaining the conceptual genesis of the collaboration. "In the same way Ennio Morricone may have conceived the 'Spaghetti Western' genre by fusing together various contemporary motifs and moods to conjure the spirit of a past era, we're imagining stories and scenes from the Roman era, trying to manifest narratives while celebrating the distortions we see looking through the murky lens of time." And while Morricone may be a conceptual reference point for Romans, their sound is anything but—instead offering up a pair of murky, psychedelic acid-etched cuts (Emona, Delmenium) buffered by a gradually unfolding up-tempo floor-burner (Coptos).

The record is the result of several extended improvisational jam sessions in Vienna and Brooklyn in which both artists would play off of each other in the studio. Accordingly, each of the three tracks have a slight aleatory air about them, as though both artists are being led down an unforeseen musical path, not entirely certain of where it leads. This culminates in Delmenium, the record's B-side, a true techno journey, featuring an emotional, metallic synthesizer coruscating against a melancholy background.

"I like to think what we make sounds simultaneously like both of us and neither of us. We both push each other in different ways," Haslam says, recounting their production process. Auvinen adds that "[Collaboration] offers a chance to hear from someone else's perspective. Working with others, I'm often reminded of how radically different the way people hear things, and relate to them in a musical context, can be."