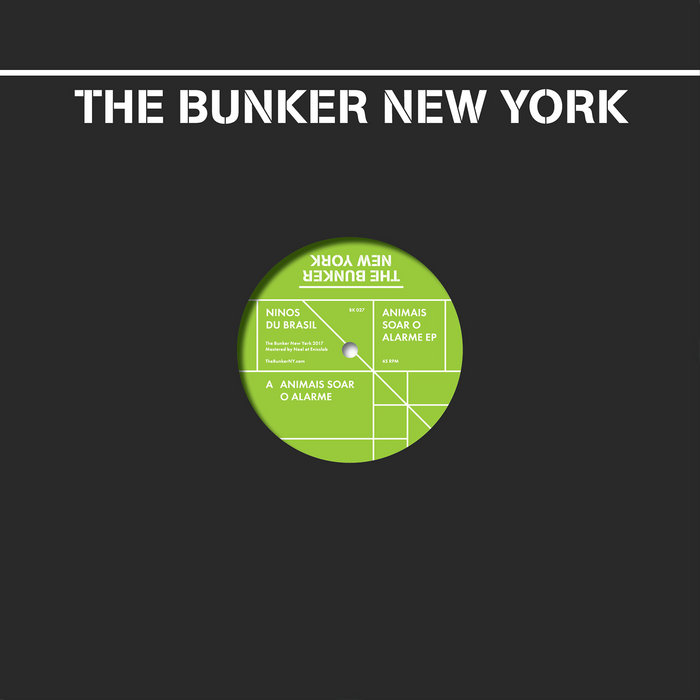 You can check out 2 minute samples of all the tracks on our SoundCloud: soundcloud.com/thebunkerny/ninos-du-brasil-animais-soar-o-alarme-12-the-bunker-new-york-027clips

Ninos du Brasil is Nico Vascellari and Nicolò Fortuni. Friends for over twenty years, the pair spent an insane amount of time listening to music together in the grey and solitary Italian countryside before starting to make their own music in 1999 as a project called With Love. Ninos du Brasil was formed in 2012 and has released records on Tannen Records, DFA and most recently a full-length album, entitled ‘Vida Eterna’ on Hospital Productions and La Tempesta International, the sessions for which also produced the ‘Animais Soar O Alarme’ 12” for The Bunker New York. From the earliest days of the project, Ninos Du Brasil embraced the wild and primordial, a spirit kept alive during unhinged live performances that utilize unconventional percussion instruments in addition to electronic elements. Nico and Nicolò shared with us their conviction that out of slight misunderstandings and second-hand knowledge comes great moments of inspiration: [We wish] “to create something unique from a wrong vision. Our name is misspelled and suggests this idea that in being wrong lies the potential for unicity.”

Invoking the power of a stampeding herd of mythical beasts, the ‘Animais Soar O Alarme’ 12” is a carnivalesque dancefloor exploration that highlights the unbridled percussive sound for which Ninos du Brasil have become known. The A side presents the shadowy duo’s original track - a rollicking and propulsive explosion of beats unified by steady stomping bellows of unknown origin. The B side sees The Bunker resident DJ Patrick Russell providing the first ever remix of a Ninos du Brasil track, imbued with the precision, discipline and restraint for which he has become known, making Animais Soar O Alarme seem all the wilder for his skillful steadying hand.

If you like Animais Soar O Alarme EP (The Bunker New York BK-027), you may also like: