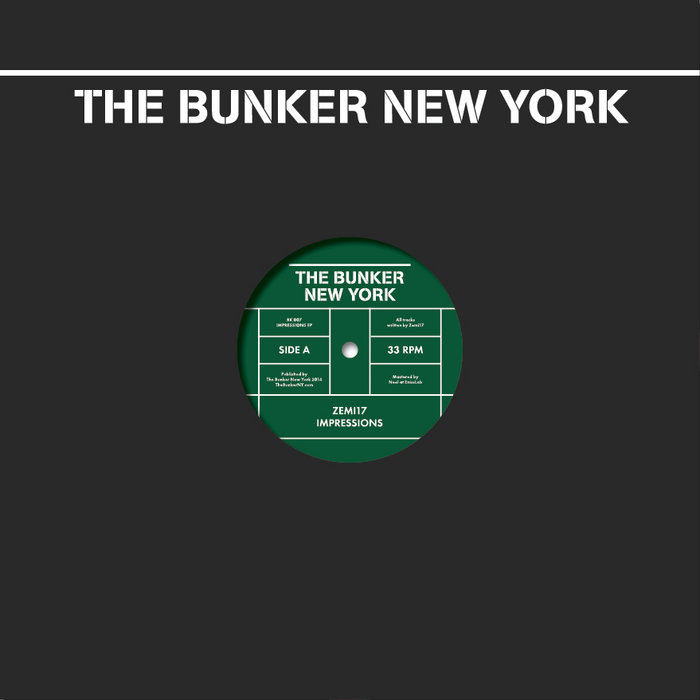 dave alexander Great electronic single, especially the B side which is filled with xylophone rhythms that swirl to the point of mesmerization! Favorite track: Rangda.

The composer and sculptor Aaron Taylor Kuffner is well known for co-creating the Gamelatron project in 2008, the world’s first fully robotic gamelan orchestra. His one-of-a-kind creation has been shown in major venues and festivals worldwide, ranging from the Smithsonian to Fuji Rock, and at galleries and festivals across Asia, Europe, Russia and North America.

In 1997, Kuffner created another musical project, Zemi17. Zemi means cicada in Japanese and the 17 references the 17-year lifecycle of the periodical cicadas found in the northeast of the United States. The success of the Gamelatron Project put Zemi17 on indefinite hiatus until The Bunker dug out one of Kuffer’s last surround sound live sets from Unsound New York in 2012 and asked him for a 12” of that material.

The Bunker is proud to release “Impressions” and “Rangda,” two long and seductive tracks made entirely of sounds of insects, birds, motors and urban noises spliced together with treated samples of gongs and metallophones to create lush techno compositions. It is hard to tell if this release is going to be a new beginning for Zemi17 or an homage to a wildly interesting music character who has been a part of The Bunker community from its early days at subTonic. Either way, these tracks are as beautiful as they are original.

Kuffner has been a a prolific producer of underground and outlaw events in New York since the 90's: as a cofounder of the Ransom Corp, a member of the Blackkat Sound System, Havoc Soundsystem, and Amoeba Technology, he also frequently worked with Complacent Nation. In 2002, he moved to Berlin to produce a multimedia art festival and compose for an experimental theater group, before moving even further afield to Indonesia and immersing himself in the study of gamelan.

Kuffner returned to New York in 2007, joining influential outlaw event crew The Danger as a resident DJ. He began producing music made entirely of samples he had gathered in Indonesia, re-imagined into hypnotic techno masterpieces. Alongside Dok Gregory, he amassed a large sound system that they set up in the front room of The Bunker at Public Assembly for years. Taylor also collaborated with Kevin Balktick to produce the ambient music series “Auditorium,” taught Ableton Live at DubSpot and performed on MIDI breath controllers with the trio Zero Gravity Thinkers.