Mood of the Machines EP (The Bunker New York 021) 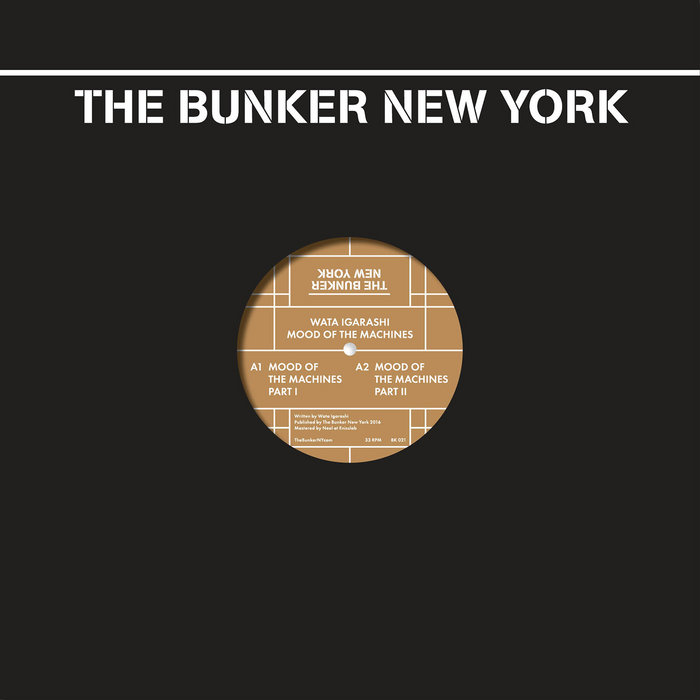 adri1522 Always loved your work but this EP is simply amazing! Favorite track: Mood Of The Machines Part IV.

Matt Ishq Its all good ! Favorite track: Mood Of The Machines Part I.

urskog This EP sounds like it's a sentient being. Favorite track: Mood Of The Machines Part II.

The sharply defined lines of Brutalist architecture, the infinite starry expanse of the cosmos, the industrial automation of the factory floor, the endless virtual worlds that make up the alternate universe of cyberspace: what do each of these things have in common with the new EP from Wata Igarashi on The Bunker New York? All are essentially a distillation of the grand, overarching spirit of modernity embodied by techno music.

Wata Igarashi is a lifelong musician and professional sound designer by trade. His decades of experience composing music for TV, web, live events, and beyond taught him the ins and outs of electronic music production — the mood of his machines — and led him to develop mind-bending techno timbres that recall the similarly hypnotic artistry of Rrose or Donato Dozzy, alongside a certain ineffable quality that makes his work uniquely his own. “Japanese people like to refine things,” suggests Igarashi. “There’s definitely some kind of particular ‘Japanese thing’ in electronic music — some Japanese producers are so detailed, carefully looking after the smallest elements,” he adds. Certainly, Igarashi himself falls in that cohort.

The last several years have been fruitful for Igarashi, with hotly tipped records on Peter Van Hoesen's Time to Express record label, the Berlin-based Midgar, and Spanish minimal techno specialists Semantica. A chance meeting at Berghain in February 2015 led Igarashi to connect with Bryan Kasenic, the man behind The Bunker New York, who already knew and loved his music. The pair developed a fast friendship based on mutual respect, and Kasenic was honored to welcome Igarashi to The Bunker New York family.

For his debut on The Bunker New York, Igarashi presents Mood of the Machines, a pristine techno record so perfectly composed, so tightly woven, that it simply speaks for itself. Each of the four untitled tracks offers a different bassline groove paired with slowly unfurling cosmic sound design, featuring synthesizer leads that sound like an aural glimpse into the inner workings of your brain. Techno is a universal language, and The Bunker New York is proud to share Wata Igarashi's latest dancefloor declaration with the world.