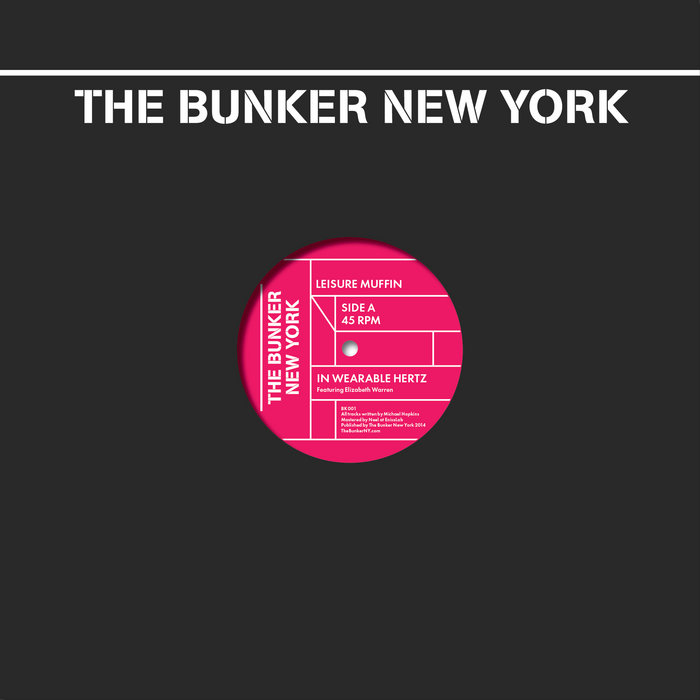 Thibaut Devigne Minimal techno excellently produced. Will take you on a journey if you let it do. Favorite track: Heldscalla - full version.

For over a decade, The Bunker has been a storied night of musical exploration in New York City. The adventurous electronic music lineups—which bring together fringe artists who also know how to move a dancefloor—made the party legendary amongst NYC cognescenti. Starting a record label was the next natural step in The Bunker’s evolution, featuring contributions from artists who frequent the shadows of the party and established guests. The label kicks off with a long-awaited debut EP from Leisure Muffin, aka Michael Hopkins, a regular attendee and performer at the party since it first originated in 2003.

The centerpiece of the record is "In Wearable Hertz," a soaring nine-minute epic pairing modular synths with violin played by Elizabeth Warren. The elegiac music brings to mind the cinematic sweep of vintage Klaus Schulze, the expanding universe of Laurie Spiegel. "Heldscalia" begins with a disorienting cascade of filter sweeps before falling into a deep pool of sound. "Alys" recalls vintage LFO and 808 State, while sounding ruthlessly modern - a banging dancefloor anthem for an alternate reality.

Leisure Muffin produced this EP in 2013 under very difficult circumstances. When he found out his mother was dying, he packed up everything, quit his job, and left a girlfriend behind in the Bay Area to move to Maine to take care of her. Making the EP in a studio right next to his mother was the only thing that kept him sane during this time. He showed her the basics of how his modular worked, and she would sit in on his sessions. She was particularly fond of “In Wearable Hertz,” which he finished shortly before she passed away.

Leisure Muffin’s modern take on kosmische music is not easy to pin down. Influences and reference points are extraordinarily wide-ranged, but include early Warp (Seefeel, Autechre, and Aphex), Drexciya, Skinny Puppy, Meat Beat Manifesto, Coil, and Perrey and Kingsley. He was also deeply influenced by the sound of The Bunker (and other) dancefloors. A former audio engineering educator, Hopkins has a mastery of both Ableton Live and modular synthesizers. After drooling over, and even borrowing some key pieces of gear from Sarah Lawrence College and Charles Cohen’s studio over the years, the recent advent of more affordable modular equipment meant that he finally has a dream setup of his own.

“The fact that modular synths have become affordable now has really helped,” he says. “I always wanted to be writing using that stuff and after waiting for a really long time, I finally have the kind of setup I always dreamed of.”

It makes sense that someone with Leisure Muffin’s broad tastes makes music that is hard to classify. When most people tell you that they love all forms of music, further examination of their claim usually leads to disappointment. This isn't the case for Leisure Muffin. If you join him for tea, you could end up listening to an accordion record as easily as you might hear electronic music. He spent most of his life working in some of the best and worst record stores in the USA, for the pure joy of being able to hear new sounds every day (before the internet put all music at everyone’s fingertips). If you talk to him you might hear about the pleasures of attending the symphony after eating a pot brownie or how you should listen to African Juju records from the 1930s. .

"I don't know what to call it--I really just make the kind of stuff that I want to hear,” he says. “And honestly, if I didn't love dancing and playing at dance parties so much, I'd probably just be locked in a room somewhere torturing synthesizers or playing boring whale sound guitar solos for hours. Actually, I suppose I do a fair amount of that anyway. Maybe that's why it's taken me almost 20 years to actually release something that anybody is interested in putting out."

In the mid-90's, he was playing shows in clubs in the Lower East Side (Den of Thieves, Unity Gain, Tonic) when he was too young to drink. He pulled off a lot of great sets over the following years and built a reputation as a live electronic performer during an era when that was far less common. Live recordings of both his solo sets and his duos with Charles Cohen made the rounds among good friends (including The Bunker New York bossman Bryan Kasenic), but finishing a studio record had, until now, eluded him.

With the encouragement of Kasenic and The Bunker New York family, Leisure Muffin finally managed to finish an EP in the studio, and we couldn’t be happier with the results.

Violin on "In Wearable Hertz" by Elizabeth Warren

Mastered by: Neel at EnissLab
Cut at Dubplates and Mastering
Pressed at Brooklyn Phono

Featured sounds from Fly Lo and Ahmed Idris, plus Mother Nature hops on to drop off new project