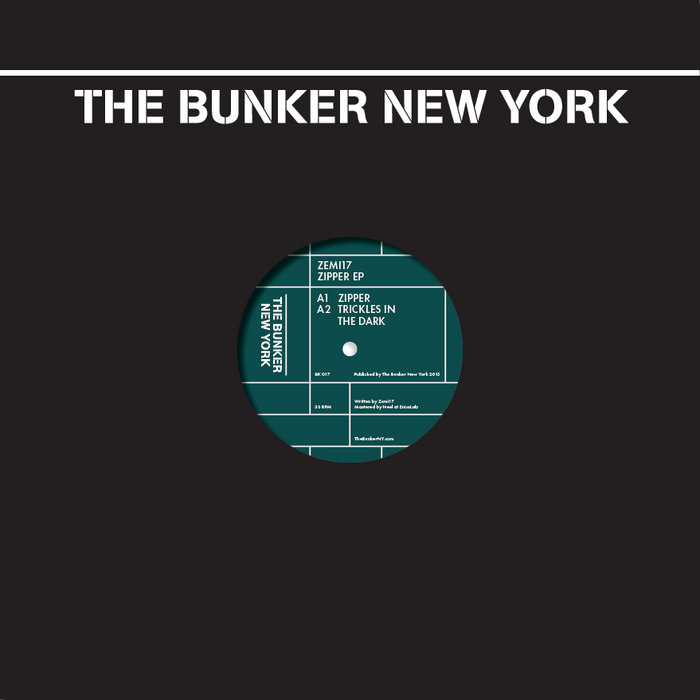 szinzan This will stay with me for the rest of my evening, (...and have a hard time looking for something to live up to this) I feel this music makes us emotionally smarter if there is such a thing.﻿

Zemi17's first release for The Bunker New York, Impressions, was a landmark release for the label, a record that brought the swirling, shifting sounds of minimalist music to the dancefloor. Zipper is Zemi17's second release on The Bunker New York, and sees him expanding his musical palette considerably, in which his gamelan-derived sound design pushes further out towards the expanses of techno's realm.

Aaron Taylor Kuffner's first introduction to gamelan came through David Simons, a performer in the renowned New York City downtown new music troupe Gamelan Son Of Lion. Many years later, on a trip to Indonesia, he visited a dear friend who herself was studying gamelan at Institut Seni Indonesia Yogyakarta. Quickly he became enraptured with the instrument's possibilities, and enrolled in study himself. Soon after, his laptop — containing electronic music software and years' worth of recordings — was stolen. "Rather than replace my laptop, I just concentrated more on gamelan," Kuffner explains. "A few months turned into a few years, and the more I learned, the more I wanted to know."

Upon first listening to Zipper, Kuffner's history with gamelan is self-evident. Each track on the EP rings, rolls, and resonates with the rich tones of a gamelan orchestra. (Explaining the ease with which he bridges the worlds of techno and gamelan, Kuffner mentions one particular similarity: "The lowest-pitched gongs in a Javanese gamelan resonate between 38 - 50 Hz, right where most electronic kick drums are. What other indigenous non-electronic music form has sounds in that range?") And while gamelan provides the foundation for the EP's sound design, Zipper is definitely a techno record — the rollicking electro rhythms of "Trickles in the Dark" and the hypnotic, dark mood of "An Army of Crickets," for instance, will set dancefloors alight.

Zipper is the product of years of work. "The tracks on this record began as field recordings taken from Indonesia — insect sounds, gamelan, found sounds," says Kuffner. "Each of these tracks comes from a different stage of my music-writing process over the years. I eventually developed a kind of 'sketch and improv' technique, re-arranging groupings and arrangements of a series of elements. Zipper reflects a culmination of this technique, and in my opinion, it's representative of some of my best work."

We couldn't agree more, and we're proud to present Zipper for release.

Featured sounds from Fly Lo and Ahmed Idris, plus Mother Nature hops on to drop off new project