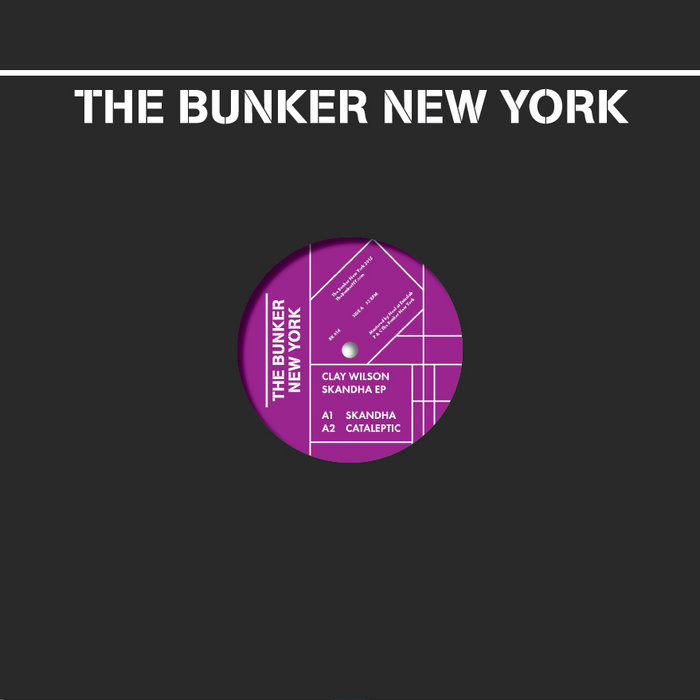 Taylor Hawks I wish there was more like this coming out of New York right now. Droney and intriguing. Favorite track: Cataleptic.

The stage is set from minute one on Clay Wilson's new 4-track EP, "Skandha," his second release for The Bunker New York. The eponymous first track begins with a familiar techno throb, but is quickly overcome by a blooming swirl of coruscating synthesizer pulses that seem to gather inside the listener's head, a phenomenon Wilson seems particularly interested in: "I've never been into really straightforward club techno that works in neat 8- and 16-bar sequences," he says. "I'm always looking for things that have forward momentum, ways to escape that 'block-y,' downbeat-centric feeling that you find in so much contemporary techno. For me, it's the drone—what's going on in the background—that serves to hold my interest."

Nowhere is this more apparent than on the record's second track, "Cataleptic." The meat of the track is its tightly-wound techno core built from insistent, hypnotic percussion, but it's what's happening in the background that keeps you coming back for more: The sound of a babbling brook and a plaintive, meandering bird call ("the only actual recorded animal sounds on the record," notes Wilson) gently give way to the tintinnabulation of a distant bell, whose meditative timbre brings to mind a Tibetan singing bowl. It turns out that the naturalistic, organic sounds in many of Wilson's tracks are often just that: "I make field recordings all the time, actually—on my phone," he says. "I've found field recordings have been a great way to pull things along, never repeating themselves, but also never being so upfront as to draw your attention away from the synths and drums."

That's a key point, and make no mistake—for all the flora and fauna lurking in the background of Wilson's productions, they're designed for the dancefloor through and through. "Feres," the EP's third track, slows down the pace a little bit, keeping time with a static kick-hat pattern while chunky, stepped percussion laid on top makes the track feel remarkably dynamic. The final cut, "Pict," seems to slowly unfurl like flowers at dawn, while a ghostly vocal sample (or merely something approaching it) repeats itself underneath it all.

While at times the drawn-out shimmering tones in Wilson's work may recall modern minimalism, "getting into techno, and more specifically techno production, was kind of a way for me to get away from [formal, classical musical] training," he recalls. "I had been headed down an open-minded, anything-goes path with a compositionally-geared approach, and … all those paths led to techno." And for that, we're glad.